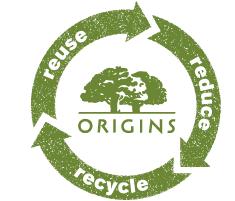 New York Readers this one is for you! In celebration of Earth Month 2010 and to further develop programs for sustaining the planet, Origins invites you to a FREE star-studded Origins Rocks Earth Month Concert featuring Grammy Award-Winner Macy Gray, on April 19th at Webster Hall New York City. Origins chose to partner with Macy as her new single, “Beauty In The World,” truly captures the sentiment of Earth Month. The concert will also include performances by emerging artists Ryan Star and Jon McLaughlin and will be hosted by special celebrity guest emcee Malin Akerman.

In an effort to further its Return to Origins Recycling Program, one free ticket will be offered to those who bring at least one empty cosmetic package, regardless of brand, to select Origins retail stores in the tri-state area, beginning Monday, April 5th. After the concert, Origins will submit all of the collected empty packaging to be recycled or responsibly converted to energy. To further its Global Plant-A-Tree Program, Origins will plant a tree on behalf of each concert attendee, adding to the impressive tally of nearly 24,000 trees planted since the program’s inception.