So, football. That means my HD TV is being monopolized by my boyfriend, and I have to be careful I don’t get startled by his shouting at it during a game if I’m not paying attention. Sometimes I watch the games with him (hello, guys in tight pants? yes please…) for some “quality time” (during which I may or may not doze off). I definitely wasn’t expecting to see something that needed to be on this blog while “watching” football. But then…

HE DID IT. TOM BRADY FINALLY CUT HIS HAIR! 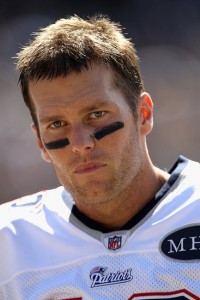 We complained almost a year ago about Brady’s hair starting to look suspiciously like Justin Bieber’s, and hey even the Biebs has cut his hair since the bowl cut. But it didn’t even stop there. Brady’s hair eventually got close to Ashton Kutcher proportions.  Some guys can pull off long hair. Kutcher and Brady? Not so much. Besides, drowning those cheekbones in a sea of messy hair is criminal. We’re much happier to see Tom Brady with short hair. Are you? 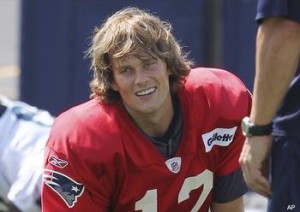