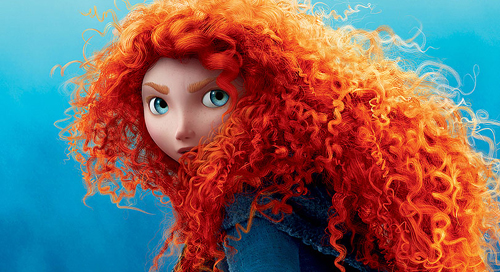 Leave it to Disney to take it up a notch and give me something to write about!  I was sitting in the theater watching previews and noticed the trailer for Brave, the new Disney Animation Movie.  I was taken aback when I noticed the Princess in the movie, Merida.  She has the most amazing fiery RED CURLS!  They are disheveled, natural, and mesmerizing!  The color along with the varying shapes in the hair curls can only be made by the advances in technology ala Pixar.

Merida is the very first Disney Princess with natural curls.  According to Pixar the task of creating natural flowing curls was not a simple task.  It took six Pixar research engineers and artists over three years give Merida the perfect curls!  Well it was well worth it!  Merida’s hair looks amazing and may inspire more woman to flaunt their natural curls!