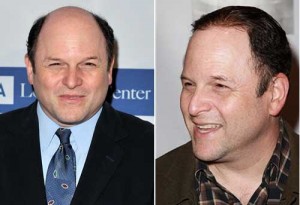 Perhaps television’s most famous bald man, Jason Alexander is best known for his role as George Costanza on Seinfeld. Through his character, Alexander became sort of an unofficial spokesperson for bald men everywhere. In fact, GQ included him in their list of the most powerful bald celebrities. But it would appear his term as bald superhero has come to an end!

Jason Alexander was photographed recently sporting a new head of hair! While I must say it looks pretty good on him, I’m going to have trouble wrapping my head around this one…no pun intended.